From the depths of the Mid-Atlantic’s canyons to its sandy shores, explore the physical and chemical properties of the ocean with the Portal’s new Oceanography theme.

The Oceanography theme currently offers four categories of data that include a total of 24 map layers, with several more on the horizon. This initial set of Oceanography layers was designed to present a wealth of data in simple, user-friendly ways that don’t duplicate information offered by other online mapping tools.

The following data can be accessed by clicking on the “Oceanography (BETA)” link beneath the Data tab in Marine Planner:

Bathymetry: These three map layers depict the topography of the sea floor in areas where information was available. The layers are named after the organizations or missions that compiled the data.

Fronts Probability: Ocean fronts – areas where water masses with differing temperatures, salinities and other properties meet – play an important role in ocean processes ranging from plankton blooms to the accumulation of marine debris. Here, eight layers show areas where fronts were most likely to form at the sea surface in seasons from 2012 and 2013.

Net Primary Productivity: These 12 layers provide an indication of photosynthetic activity in seasons from 2011 through 2013. Specifically, net primary productivity measures how much more carbon dioxide aquatic plants digest than they release into the water and atmosphere.

Submarine Canyons: The locations of over 30 major canyons in the Mid-Atlantic and Northeast are shown here. This layer was previously available on the Portal under the Marine Life theme.

The Oceanography theme is currently labeled as a “BETA” version, recognizing its status as a product that remains under development. Among the additional data offerings planned for the coming months are map layers illustrating the Mid-Atlantic’s currents, surface temperatures and bottom temperatures. Users will be able to compare data from several time periods, which may be useful in spotting trends and anomalies, such as areas where the ocean is getting warmer or cooler.

The Portal Team is producing the Oceanography map layers in partnership with the National Oceanic and Atmospheric Administration (NOAA) and the Mid-Atlantic Regional Association Coastal Ocean Observing System (MARACOOS). 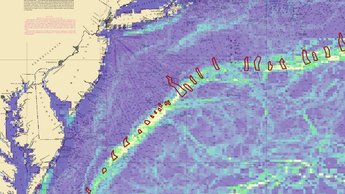