Marine Planner users can now access maps and find the locations of three ocean areas off the Mid-Atlantic and New England coasts which recently received special protections from the federal government. Maps for the Atlantic Canyon Withdrawal and the Northeast Canyons and Seamounts Marine National Monument zones can be accessed in the Administrative theme, while the Frank R. Lautenberg Deep-Sea Coral Protection Area is available in the Fishing theme under the Management Areas heading.

Enacted by the White House in December of 2016, the Atlantic Canyon Withdrawal barred mineral extraction in 31 areas from Heezen Canyon off the New England Coast to the Norfolk Canyon off Virginia. The move was intended to shield these ecologically sensitive marine environments from future oil and gas exploration and development.

The Northeast Canyons and Seamounts Marine National Monument is the first marine national monument created in the Atlantic Ocean. The Monument, located 130 miles southeast of Cape Cod, covers a total area of more than 4,900 square miles. Through its designation as a national monument in September of 2016, the area was placed off limits to commercial and industrial activities that could disturb its diverse marine ecosystems.

The Frank R. Lautenberg Deep-Sea Coral Protection Area was developed in a collaborative process by the Mid-Atlantic Fisheries Management Council to protect 38,000 square miles of known and likely coral reef habitats in the Mid-Atlantic from bottom-tending fishing gear such as trawls and dredges. It was named in honor of the longtime New Jersey senator who is credited with crafting several important pieces of ocean conservation legislation, including the Magnuson-Stevens Act provisions that allowed for deep-sea coral protections. The map layer shows a broad protection zone located in deep waters (greater than 450 meters) past the outer continental shelf edge and 15 discrete coral zones (marked with purple stripes) that encompass  canyon areas with varying depths. 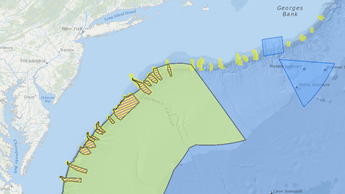