Where Is Acidification Being Monitored in Your Area?

A group of six new maps in Marine Planner provide a comprehensive view of the places at sea, in coastal waterways and estuaries where the waters are being monitored for signs of increased acidification. 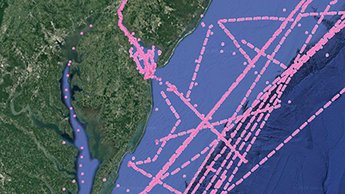 The Portal’s collection of now seven acidification-related maps are available in the Water Quality theme. Taken together, the maps will serve as a valuable tool for the Mid-Atlantic Coastal Acidification Network (MACAN) as it develops a robust network that monitors for changes to the region’s water chemistry.

The Portal’s first acidification map, which debuted in June and is now labeled All Acidification Monitoring Sites, shows thousands of sites where sampling is currently being or has been conducted in the Mid-Atlantic. It breaks the sampling locations into five data collection types: sites that are being continuously monitored; sites where one-time samples were taken during cruises; sites where samples were taken by a glider; fixed stations that collect data on an ongoing basis; and the sites of former fixed stations. Users can click on any of the individual points for a pop-up with information about the location, the organizations collecting data and the types of information gathered.

That data has now been broken down into six additional maps that were identified by scientists and other MACAN stakeholders as useful for developing the monitoring network. They are:

The maps do not present the monitoring data itself, but do link to the data where possible.

Acidification in the Mid-Atlantic

Ocean acidification is being driven by increased levels of carbon dioxide dissolving into seawater, increasing its acidity and lowering its pH. Scientists believe the Mid-Atlantic region may be especially vulnerable to acidification in its coastal waters, where high nutrient levels and rapid growth of plankton further reduce pH. OA causes organisms to expend more energy to regulate their body chemistry and reduces the availability of calcium carbonate, which corals, clams, oysters, lobsters, and other species require to build and maintain shells and skeletons.

MACAN was formed in 2016 to examine and gather information about acidification in the five-state Mid-Atlantic region spanning from Long Island through Virginia. Visit midacan.org for more information.

The maps will continue to be updated as additional information about monitoring sites emerges. If you have information that you believe should be included in these maps, please contact info@MidACAN.org. 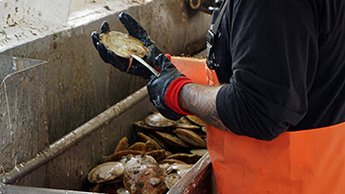 Watch the webinar below for a guided tour of these maps and a discussion of acidification in the Mid-Atlantic, hosted by members of the Portal Team and MACAN.