While offshore wind is a target industry for energy production in the region, it is imperative that offshore wind development proceed with full consideration of any potential effects on marine life as well as other ocean resources and uses. To help coastal managers and decision makers build understanding of the potential interactions between offshore wind development and other ocean uses and resources MARCO’s Mid-Atlantic Ocean Data Portal houses and displays thousands of data layers.

Current federal Bureau of Ocean Energy Management (BOEM) offshore wind development lease areas are depicted in a series of Portal maps and can be overlayed with habitat, fisheries, and other ocean use data layers. Scroll below for a tour of offshore energy lease areas throughout the Mid-Atlantic.

The Empire Wind project, a roughly 80,000-acre triangular area located roughly 20 miles outside of New York Harbor, is expected to produce over 800 MW of energy. It is leased by Equinor Wind US.

BOEM is also evaluating the suitability of additional areas within the New York Bight, as depicted in the BOEM Wind Planning Areas layer.

There are currently three lease areas located off the coasts of Delaware and Maryland.

The first offshore wind turbines in U.S. federal waters are now producing power off the coast of Virginia. Installation was completed on two turbines in the summer of 2020 and they became fully operational by October.

The Coastal Virginia Offshore Wind (CVOW) pilot project is designed to demonstrate a grid-connected, 12-megawatt offshore wind test facility on the Outer Continental Shelf about 27 miles off the coast of Virginia Beach. The data obtained and lessons learned from this project will be made publicly available and inform the future production of renewable energy within the adjacent commercial lease area, where construction is expected to begin in 2024. The research site is leased by the Commonwealth of Virginia’s Department of Mines, Minerals and Energy. Dominion Energy was designated as the lease operator and contracted with Ørsted to construct the turbines and L.E. Myers Company to perform onshore electrical design and construction.

Approximately 115,000 acres of offshore has been leased for offshore wind development, including one aliquot (shown as dark square) that was designated for the development of the test turbines (sites marked as turbine icons). A submarine power cable connecting to this area is seen in blue. The full Virginia lease area, controlled by Dominion Energy and Ørsted, is anticipated to produce 2,500 MW of electricity.

Offshore wind energy is a growing industry in the Mid-Atlantic, and it is important that impacts to the ocean’s ecological and economic resources are carefully considered during the planning and management of new and existing projects.

The map above shows AIS data for federally permitted fishing vessels of all types in 2017 and the BOEM lease areas.

The map now transitions to display an overlay of the BOEM lease areas and one type of fishing activity -- in this case, VMS data for surfclam/ocean quahog fishing in 2015-16.

Below are some fisheries-specific informational resources for the Mid-Atlantic region.

The Mid-Atlantic coast provides habitats for a number of migratory and non-migratory birds, marine mammals, sea turtles, corals, and more, including some that are considered threatened or endangered. The Portal houses over 4,000 data layers depicting the abundance and species richness for many marine life groups and individual species.

These data layers can be activated in combination with those showing offshore wind areas, to help users analyze their compatibility. The map above shows the abundance of marine birds with high collision sensitivity and BOEM's Active Renewable Energy Lease Areas.

All of the proposed offshore wind leases In the Mid-Atlantic are located on the Outer Continental Shelf (OCS), which encompasses all Federal submerged land, subsoil, and seabed from 3 to 200 nautical miles offshore. The Energy Policy Act of 2005 placed oversight responsibility on BOEM for all renewable energy projects within the OCS. Thus, BOEM is responsible for issuing leases, easements and rights of way for offshore wind projects.

Many states conduct Federal Consistency reviews to ensure that federal actions are consistent with state coastal management policies. States participating in the federal consistency provision of the Coastal Zone Management Act may have the authority to review offshore wind development activities to ensure federal actions are consistent with that state’s coastal management policies.

Federal consistency is the principal tool that allows states to influence OCS activities, as many may not directly require a state permit or approval for implementation (with the exception of associated facilities in or on state waters or lands). Included within the consistency review is a mandatory public comment period, in which states are required to provide for public participation. 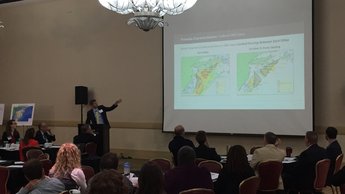 States are provided an opportunity to communicate with BOEM about offshore wind projects through the Intergovernmental Task Force, which was created by BOEM in each state that has expressed interest in offshore wind development. Some states also offer state-led stakeholder meetings in addition to the BOEM Intergovernmental Task Force meetings. Meeting information for each MARCO state is listed below.