The following is the second in a two-part series focused on offshore wind energy transmission siting. Part I provided an introduction to the planning process involved with designing power cables in federal waters.

As the first transmission line to connect to active turbines in U.S. federal waters, the Coastal Virginia Offshore Wind (CVOW) pilot export cable is providing valuable lessons for future U.S. projects. Constructed through a partnership between Dominion Energy and Orsted, the line was activated in 2020, carrying power onshore from a pair of test turbines 27 miles off the coast of Virginia Beach. 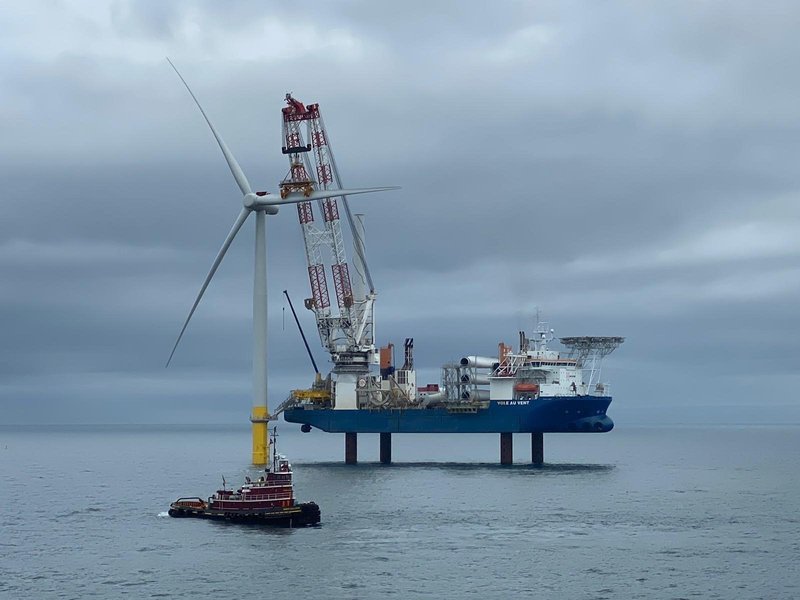 Landing a cable at Virginia Beach poses unique challenges. As home to the world’s largest Naval base, the waters present a veritable obstacle course for a cable alignment, with off-limits training zones and historic explosive dump areas narrowing the options for developers. The work was informed through analysis with GIS tools such as the Mid-Atlantic Ocean Data Portal and Marine Cadastre, extensive surveying by scientists at sea, and robust stakeholder outreach.

Dominion Energy Environmental Services Environmental Technical Advisor Scott Lawton described some of the major considerations that went into designing the alignment. A snapshot of these can be seen in the map above, with the CVOW cable shown in dark blue. 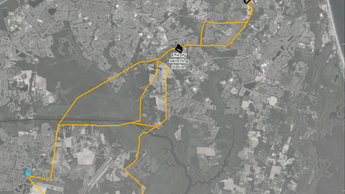 The route of the CVOW cable's connection to power infrastructure on land.

For the final approach to shore, Lawton said it was crucial for the alignment to hit the beach at a perpendicular angle. Because the tidal zone is sensitive to waves and shifting sands, the designers sought to pass through it as directly as possible.

The cable landed on the State Military Reservation property, chosen because it avoided the dense waterfront communities and tourist areas to the north and Naval training grounds to the south. The line runs underground to a nearby substation on the Naval Air Station Oceana grounds and from there the power is transmitted by traditional above-ground cables into the grid.

Lawton noted that when the full offshore wind area off Virginia Beach is developed, three substations will be constructed at sea to handle the vastly increased level of power being generated – 2.6GW versus the 12 MW being produced by the test turbines. Another nine cables are planned to follow a similar alignment to the first cable, but spaced out at least 100 feet from each other. They can’t be bundled together due to the heat they produce, and the spacing offers a measure of protection in the event one gets damaged by an anchor or fishing gear.

Directing enough electricity to power 660,000 homes into the grid will present a host of additional challenges, but Lawton notes, “That’s what Dominion Energy does. Once we hit the shore, we’re back in Dominion’s area of expertise. We’re used to doing transmission lines – it’s a part of our core function.”

Part of the work will entail continued communication with residents in the area as power lines are upgraded to handle the increased voltage. Stakeholder outreach has been a significant part of the project, with advisory groups formed to exchange information with advocacy and research organizations concerned with wildlife and environmental issues, including the safety of the endangered North Atlantic right whale; and standing calls scheduled with state and federal agencies. Discoveries made by their survey vessels have been shared with the National Oceanic and Atmospheric Administration, which has updated its publicly accessible (including on the Portal) nautical charts accordingly, Lawton said.

For government agencies and developers readying for cable siting projects across the country, Lawton offered the following advice.

“Educate, because this is new to everyone,” he said. “Start talking to your stakeholders early and often and don’t assume they know what you know, because they don’t. Treat them with respect, value their opinions, and see if there’s middle ground to be found.”

Story by: Karl Vilacoba, Monmouth University Urban Coast Institute. He can be reached at kvilacob@monmouth.edu.