The six new data layers can be found within a new dropdown category called “Proposed Passive Acoustic Network” in the Portal's Marine Life theme. Four of the layers represent elements of a proposed grid layout for PAM. Two additional layers can be overlayed onto this grid to show locations where bottom-mounted PAM devices are currently deployed and locations where North Atlantic right whales have been detected by such devices within the grid since 2010. All six layers can be downloaded for use within desktop GIS programs.

These layers are meant to inform and assist the NOAA, along with the four sectors of RWSE – other federal agencies, states, environmental non-governmental organizations, and offshore wind industry members – as they plan and deploy whale monitoring programs on the U.S. Atlantic coast. Users can access the six new layers on the Portals and also view detailed maps and information about when and where specific whale, dolphin, and other cetacean species have been previously acoustically detected in the North Atlantic Ocean based on PAM deployed between 2004-2021 in the NOAA Northeast Fisheries Science Center's Passive Acoustic Cetacean Map.

The proposed grid design is based on achieving 100% acoustic coverage of North Atlantic right whales by using 20 x 20 km grid cells spacing throughout offshore wind energy lease areas and larger 40 x 40 km grid cells aimed at connecting the offshore wind energy areas, with suggested PAM stations centered in each respective grid cell. The latter would achieve acoustic coverage of around 50% of the area monitored, balancing the costs and logistics of collecting regional data with the ability to detect species presence across contiguous areas of interest within and between offshore wind areas. More detailed regional PAM monitoring designs can be seen for the five main current wind energy areas of interest. Baseline monitoring over the larger region is essential to be able to understand changes in species presence at a relevant scale for these highly migratory baleen whale species. The area grids will be updated as new wind energy areas are leased. 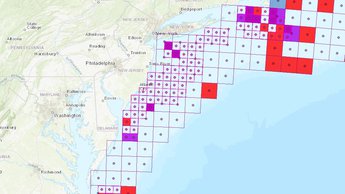