The Submarine Cable Areas map includes the lines previously shown in the NASCA map, which covered active and inactive cables owned by members of the North American Submarine Cable Association. It also improves on the NOAA Charted Submarine Telecom & Power Cables layer by adding recently constructed lines and eliminating lines that have been decommissioned and removed from the seabed by their owners. Users can click any line for a pop-up containing information including the cable’s name, owner and status.

The coasts of New York and New Jersey have long been a nexus point for submarine cables transmitting phone calls from America to distant shores in Europe and South America. In recent years, new lines have continued to make landings in the Mid-Atlantic, particularly in the Virginia Beach area, to accommodate the growing demand for high-speed Internet traffic.

The Portal will continue to highlight those new lines with its Recent Telecom Cables (2016-) map layer. It has been updated to include the Google-owned high-speed fiber optic Dunant line, which extends from Virginia Beach to St. Hilaire de Riez, France. The map is programmed to automatically turn on when users activate the Submarine Cable Areas layer, but can be muted or turned off using the Active tab. Users can click individual cables to learn their names, owners and routes.

Maps showing the routes of cables constructed to carry electricity from offshore wind turbines to onshore power infrastructure can also be found in the Submarine Cables and Pipelines collection and in the Renewable Energy theme. Power and telecom cable alignments are also visible when zoomed in on the Nautical Charts basemap in Marine Planner. 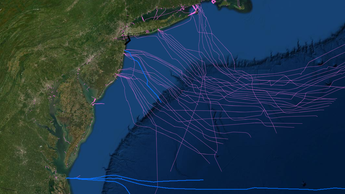