In the nearly 35 years Captain Hawkins has been fishing off Maryland’s coast, he’s seen an increase in some fish populations as well as a decline in others. 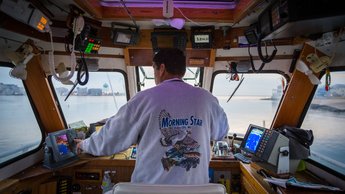 When you book a trip on the Morning Star out of Ocean City, Maryland, there are some rules:

“No radios or boom boxes allowed,” says Captain Monty Hawkins. “I’m trying to get as close to old-time fishing as I can get. It’s about the people around you and the quality of experience.”

Of course, part of that quality experience is being able to find fish for his clients and help them land a solid catch. In the nearly 35 years Captain Hawkins has been fishing off Maryland’s coast, he’s seen an increase in some fish populations as well as a decline in others. From the mid-1990s to early-2000s he saw a tremendous increase in natural reef habitat with a corresponding increase in black sea bass populations.

"Forty or 50 years ago it was no problem finding black sea bass over an abundance of soft corals. Skippers could find good bottom with simple navigation; a compass alone would get you to a reef.” Hawkins says. “Now we’re using GPS to find remnants of those once much larger habitats. Important hard-bottom communities are absent throughout the Mid-Atlantic.”

For more than 15 years he has been documenting the increases and decline of fish populations as it correlates with the increases and declines of reef habitat and coral colonies. He has been an active participant in building artificial reefs to support new populations for nearly 30 years. By his estimation, only 10 percent of historic near-shore reef structures exist today.

“It’s crazy how little has been researched in the Mid-Atlantic – huge fisheries are associated with coral reefs, but reef communities haven’t made it into science literature,” he says. “Lots of fisheries science and restoration is going on, but nothing about our near-shore corals.”

In a 2010 YouTube video, one of three he has produced documenting some of his own findings, Hawkins used an underwater camera to show the stark contrast between reefs that had been scraped clean of coral habitat, and natural or restored areas.

Whether over a shipwreck or a natural rocky reef, schools of fish teemed around the myriad of hard and soft coral structures signaling hope for what populations could be with a more focused effort on restoration.

While he is passionate about restoring reef habitat, the Captain readily acknowledges there are many other industries that rely on the bounty of the ocean environment, including the energy sector.

“I’m not opposed to wind – we need to look at alternative energy, no question.” And, he adds, “There’s a recognition that these reefs are good for fish. In an immediate sense, nobody associated with wind would want to drive a pile through them.”

As he continues his work plotting the remaining footprint of natural corals with NOAA, MARCO, The Nature Conservancy and the State of Maryland, Hawkins says the Mid-Atlantic Ocean Data Portal will be, “a critical piece of the puzzle to advance fish restoration and to understand existing habitat. MARCO is all about advancing the science.”

For more information about the State of Maryland’s Artificial Reef Initiative visit http://www.dnr.state.md.us/fisheries/reefs/