Through a collaborative partnership between the Surfrider Foundation, Monmouth University, The Nature Conservancy, and Point 97 there is now non-consumptive recreational use data available for the Mid-Atlantic region.

The ocean is a Mecca for recreation: Whether it’s kayaking, surfing, sailing or hiking nearly everyone has a favorite coastal activity. However, until recently, the true influence of recreational use in the region had gone unquantified.

“Surfrider works on a lot of coastal issues so we’re always looking for data,” said Matt Gove, Policy Manager for the Surfrider Foundation in the Mid-Atlantic.“Recreational users are really varied from beach goers and wildlife viewers and coastal hikers to kayakers and divers. There really wasn’t any data that existed before for recreational use and that was a big reason we wanted to get involved.”

“We've become kind of a go-to organization around the country for collecting this recreational data. Just in the last three or four years we’ve done a study in Oregon and are starting ones in Washington state and in the Northeast,” Gove said. “Recreational use data is hard to collect, people are dispersed. With other sectors like shipping or fishing there are regulations that require them to collect data. Recreation data in the Mid-Atlantic was kind of a blank slate.”

“The Portal is really helpful because all the data is there in one place and we can see it. And, for someone like me with no GIS experience, it’s really easy to make a map, share a link to it, and use it to explain to people where we did the survey and what it entails.”

For people like New Jersey native Christine Bell, who has spent most of her life on the coast, doing just about every water-related activity you could think of, it was easy to pinpoint her favorite places on the coast and in the ocean:

She grew up spending summers on the beach at Bay Head, near her grandparents’ house.  At 14, she was a beach cleaner; at 18, she was ushered into the lifeguard stand just north at Sea Girt, paddling and kayaking as part of her training. A competitive swimmer, she frequented the open ocean mile races sponsored by towns up and down the coast, and during college she would train during the summer months by going for ocean swims in Long Branch. She surfed the breaks throughout Monmouth County. She went to a special magnet high school focused on marine science on the slender spit of Sandy Hook.  And she dove the wrecks offshore, eventually becoming a certified dive instructor.

But if this longtime leader in The Surfrider Foundation’s Jersey Shore chapter has to choose a favorite ocean location: she’ll take the rolling beaches of Sea Girt, nestled next to the old Victorian lighthouse – a place she’s guarded and played, a place where everyone knows her name. 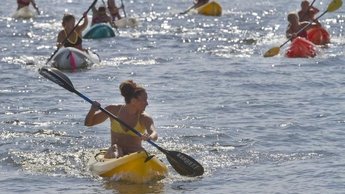 Bell, 28, was among the kinds of ocean users Surfrider and their partners were talking to.

A land use planner by day, Bell understands that rich maps that include recreational data will help bridge differing uses on the ocean.

“When you show things in relation to one another on paper you can see the connections,” she said.

Protecting the places we play

Through Marine Planner, regional scale data layers are available for planners and managers to better-inform decisions that impact or influence surfing, boating, sight-seeing and other non-consumptive activities throughout the region.

In addition to illuminating where and how people were recreating, the data collected in the survey also provides new economic information - indicating that people recreating on the coast spend more than $70 per person per day.

“That information is very helpful for us,” said Gove, “because now we know people are coming to coastal towns and spending lots of money, so if we protect these resources there’s an economic benefit to those areas.”