Explore Thousands of Maps for Birds, Fish & Mammals in the Marine Life Library

One of the largest online collections of marine life maps in the world is now available on the Mid-Atlantic Ocean Data Portal.

Roughly 3,000 maps showing populations and abundance for individual species of fish, birds and mammals along the East Coast have been added to the Portal’s new searchable Marine Life Library. The data were aggregated over the course of two years by a Marine Life and Data Analysis Team (MDAT) in collaboration with the Mid-Atlantic and Northeast Regional Planning Bodies.

Due to the sheer volume of data, the Portal Team developed a search tool specifically for the Marine Life Library that allows users to type in part of a species name to produce a list of relevant results.

The following is a quick start guide for using the Marine Life Library. 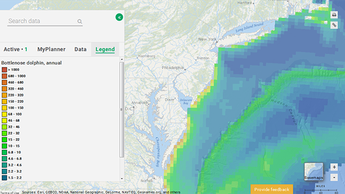 How to Use the Marine Life Library 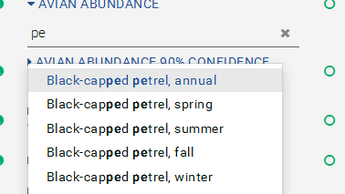 The Marine Life Library currently offers 13 searchable datasets that predict species abundance (number of animals in a given area), occurrence (probability of a species being in an area) and, for fish, biomass (measured weight of organisms in an area) based on past observations. For the birds and marine mammals, overview maps that predict occurrence or abundance based on several years of data are provided, along with supplemental datasets that show the uncertainty associated with modeled data.

Below are brief overviews of the datasets. Users can visit the MDAT abstract and metadata page for more detailed explanations.

Avian Abundance: The long-term average abundance of individual species in an area based on data from 1978-2014. Two supplemental datasets for interpreting the data — Avian Abundance 90% Confidence Interval and Avian Abundance Coefficient of Variation — are provided.

The publication of these individual species maps’ follows the release of an initial set of over 100 summary maps based on the MDAT data. Those maps grouped together multiple individual species with common characteristics to provide simple snapshots of each group’s abundance, core areas and species richness. For example, Coastal Waterfowl maps include data for various scoters, ducks, loons and eiders. 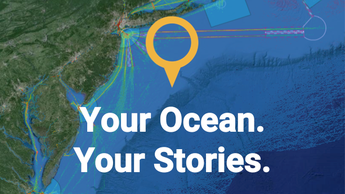 Do you have any questions about the Marine Life Library? Suggestions for how we might improve it? Send us an email at portal@midatlanticocean.org or tweet us at @PortalMARCO.