A dozen new map layers added to the Portal’s Security theme portray Department of Defense (DOD) at-sea training and testing areas as well as locations of pertinent infrastructure. In sharing this unclassified data for use in the Portal, the DOD has made an important contribution to regional ocean planning and public awareness of offshore areas in the Mid-Atlantic that are critical to national security.

A sample of the new map layers available in the Security theme.

The new layers depict military installations, warning areas, range complexes, transit lanes, testing ranges and other training areas. The DOD uses these layers to assist with analysis, planning and decision-making, and provided the geospatial information to the Mid-Atlantic Regional Planning Body (MidA RPB) for use in the development of the Draft Mid-Atlantic Regional Ocean Action Plan. The Draft Plan, which is available for review and public comment through Sept. 6 at boem.gov/ocean-action-plan, calls for greater use of the Portal as a tool for engaging other government agencies, ocean-reliant industries and other stakeholders.

“The Mid-Atlantic is home to the largest Naval base in the world in Norfolk and a total of nine military installations along its coast,” said Joe Atangan, the Joint Staff representative on the MidA RPB. “The region’s airspace and waters are critical for a diverse range of training exercises, national defense activities and military operations. It’s important that ocean users understand where we operate so they can keep themselves safe and we can do the work necessary to keep our nation safe.”

The largest DOD areas mapped on the Portal are the Military Range Complexes, a set of zones that encompass a water component (above and below the surface), airspace and in some cases a land component where training and testing occur. The Narragansett, Atlantic City and Virginia Capes (VACAPES) range complexes are located in the Mid-Atlantic region. Some of the other new layers include: 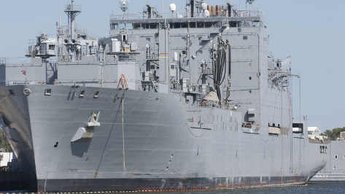 Since virtually every ocean use that occurs in the Mid-Atlantic overlaps with some type of DOD designated area, presenting an accurate picture of the DOD use of ocean spaces is crucial for effective planning for compatible ocean uses like commercial shipping, fishing, sand mining, and energy development.

The new layers augment the existing selection of map layers available on the Portal under the Security theme. These include Unexploded Ordnances and a Danger Zones & Restricted Areas layer which is hosted externally by the National Oceanic and Atmospheric Administration. The Portal also hosts a layer in its Renewable Energy theme called the DOD Offshore Wind Mission Compatibility Assessment, which grades individual offshore wind energy lease blocks based on their compatibility with DOD operations.

For more information on the Portal’s DOD data, visit the Security section in the Data Catalog.